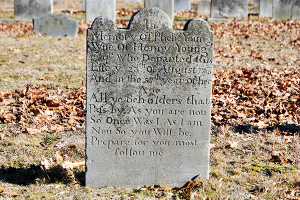 Summer is nearing an end, a time when the Middle Village and surrounding farms would be watching the skies for much needed rain as the harvest of the fields along with the offerings of the nearby waterways would sustain them over the long winter months.

But on August 23, 1766, they arrived at the Old Church Yard on foot, horseback, or by horse and wagon to honor the last request of one of their own, Phebe Young, and lay her to rest in the shadow of the little frame church she loved. Was she the first to be laid there? There are other stones, rough hewn with initials chiseled on them that could be older. There were wooden ones which have rotted away over time. Others might have been laid in the shadow of the old church in unmarked spots, their names lost to us with the passing of the years. 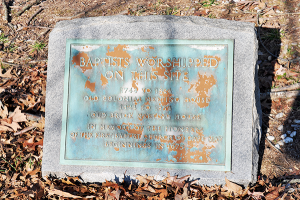 The cemetery is located on a plot of ground purchased from Jeremiah Hand for one dollar in 1744/45. It was purchased to enable the congregation to build their Second Meeting House. This house was used until 1824 when the Third Meeting House was built. In 1854, the Third Meeting House burned down and a new meeting house was built in town. The space where the old brick church stood has been left open and a plaque was laid in 1969 to honor those who worshipped there. Over the years, different pieces of ground have been added and now it encompasses around seven acres on both side of Church Street.